When I went to a British school 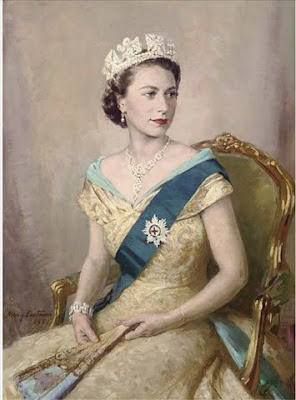 As I've mentioned before, my parents were missionaries in Beirut, Lebanon, for a couple of years when I was a little girl in the mid-60s. I recently dug up some things I wrote reminiscing about my time there. Here you go:
Manor House School
Manor House was very near our first home--in fact, in clear view of our balcony. It was situated in a building the color of manila paper, with green trim. I was once told that the bulding had formerly been a nunnery.
It had about four stories, and was very plain inside, with small classrooms and none of the bright artistic decorations I was used to in my American schools.
The students wore uniforms--the girls my age dressed in gray pleated skirts, gray V-neck pull-overs, and white blouses. All I remember about the boys' uniform is that they wore short pants, which seemed to me very strange.
Portrait of the queen
I remember my first day. I sat in the lobby with my parents, facing a large portrait of Queen Elizabeth II. I was nervous, shy, and disoriented.
In time an older boy with a British accent escorted me to my classroom, with its teacher, a stout, dark-haired, middle-aged lady named Miss Diamond.
Gradually I became accustomed to Manor House School. the books were plain but not dull, with absorbing stories about people like Robin Hood and Little John. At Miss Diamond's instruction, I used a British accent when reading aloud in class, and became quite "fluent."
Miss Diamond was not unkind, but she was annoyed by my habit of saying "OK," and taught me to always respond with "Yes, Miss." She found my little Americanisms annoying, and did her best to rid me of them.
A large, jolly lady named Madame Augustine taught us French, which I learned to love. Arabic I found less fascinating, but I applied myself and learned the rudiments.
Miss Gardiner
My second year at Manor House started out calmly enough--until our new teacher from England arrived--Miss Gardiner.
Miss Gardiner terrified and awed me. She was stern, strict, overly puritanical in my opinion, and unkind. My classmates shared my terror of the large old lady with the iron-gray hair worn in a braid encircling her head and a round, bespectacled face.
I remember how it annoyed me when, after lunch, she would clean her teeth with her tongue. How she terrified me when she hit my best friend, Nadia Nash, for cheating!
Nadia was part Lebanese, part British, and spoke with a delightful French accent. Her mother was a popular French and music teacher at Manor House, and we were the best of school friends. I shared her tears over the humiliating corporal punishment Miss Gardiner had administered to her.
I was fond of reading books, which I kept on my lap away from Miss Gardiner's eyes. So you can imagine my horror when she punished Serena McClelland for doing that very thing! Serena was the beautiful child of Scottish missionaries. I admired her silky blond hair, fair skin, pink cheeks and blue eyes, and it hurt my very soul when she cried.
Math--what awful memories that word conjures! The students were far ahead of me in that area, and it seemed I couldn't grasp any but the simplest principles. Most of the morning lessons were devoted to math, so after lunch I could more or less relax.
Reading time
At this time I could sit in my class and listen to Miss Gardiner read. She was constantly reading aloud to us, and it was the only part of her teaching that I enjoyed.
She read to us of the history of Britain, and I was fascinated by the kings and queens--a fascination that continues to this day. She read Greek mythology and classic literature.
So I profited from Miss Gardiner's teaching after all. She helped instill and nurture in me a love of literature that grew steadily.
Manor House seemed like an odd school to me, but I know that much of what I am today was influenced by my time there. I've no doubt that my Anglophilia--love of all things British--took root at that time, and has never left me.
My fifth grade was spent at American Community School, almost an exact replica of a Hometown USA school. It was fun and interesting, but not nearly as much of a really different experience as was Manor House School.
Posted by Cindy Swanson at 7:07 AM

What a fascinating read, Cindy! How wonderful of you to share those memories. My children will enjoy hearing about some of your "adventures."


"At Miss Diamond's instruction, I used a British accent when reading aloud in class, and became quite "fluent.""

We enjoy British history around here, too, especially because we use Ambleside Online, which uses classics like Our Island Story and more.

I wish I had a fluent British accent. I enjoyed reading about your different school experience.

You have a fluent Britsh accent? Awesome. Wish I did. P.G. Wodehouse is even funnier when read aloud with a British accent. :)