13 Things to Tell You About 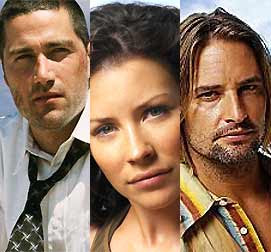 Happy Thursday! As always, if you're surfing Thursday Thirteens, bookmark this site and come back when you can pursue the links that interest you!

1) Lost season finale tonight! Show co-creators Carlton Cuse and Damon Lindelof talk about how the space-time continuum will figure into the plot in this USA Today story.

2) Don't forget, you can watch this video to see all the "Lost" flash-forwards in chronological order.

3. The sister-in-law of Nicol Sponberg has set up an e-mail account where you can leave messages of condolences and support: sponbergfamily@gmail.com Nicol is a Christian musician, formerly of the group Selah, whose 10-week-old son died Tuesday night. More here.

4. Steven Curtis Chapman's manager, Jim Houser, blogs about how the Chapman's are holding up after the death last week of their 5-year-old daughter Maria.

6. The much-maligned Spam--and I'm talking about the food product, not the e-mail stuff--is gaining in popularity. (I will never understand that gelatinous substance in the can...)

7. Tired of all the depressing, negative stuff on the Internet? You may want to check out a site called Amazingly Blessed.

8. Hmmm...looks like Jerry Falwell isn't the only person to believe in divine retribution. Sharon Stone, anyone?

9. We Christians can sometimes be pretty judgmental about other people's sins. But what about the sin of gluttony? Evangelical Outpost weighs in on the issue (no pun intended) with Sin on a Bun.

10. Dr. Seuss and Linus Pauling have been inducted into the California Hall of Fame--along with the likes of Dave Brubeck, Jane Fonda, Quincy Jones and Jack LaLanne.

Posted by Cindy Swanson at 8:21 AM

Oh, please blog about Lost, I want to know! BTW, I love your blog theme very much. Happy TT!

Thanks for sharing! I did my TT on Lost! Check it out!

My son has been demanding Spam lately. I don't know why. It's weird.

It's been a long time since I heard from you. What a nice surprise to see you had left a comment on my blog today. Thank you. You had an interesting take on TT. I was rooting for David A. and so sorry he didn't win. However, I'm sure he will have a very bright future in the music business.

Honestly, Cindy, I'd love to see you live-blog at least one "Lost" episode. There's no better one than tonite's finale!

Just reading Sin on A Bun was convicting...I'm not sure I can bring myself to click on the actual link. I'll try...maybe some M&M's would help me...