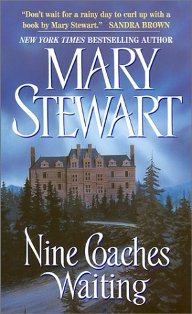 OK, sometimes there is no rhyme or reason to what I'm reading. I can have a stack of books that I need to/want/should read, and I'll meander off and read something just for the heck of it. Or I'll have two or three books that I'm dabbling in at various times of the day or week.

That's how it is right now. I have several review copies of books that I'm actually looking forward to reading, and I find myself immersed in Mary Stewart's Nine Coaches Waiting.

My love affair with Mary Stewart's writing actually began when I was just a little girl, in the mid-60's. My older sister Beverly had bought Stewarts' The Moon-Spinners (on which the 1964 Hayley Mills-starring movie of the same name was based), and I ended up reading it. And re-reading it.

Even as a little girl, the suspense and romance of the tale captured me, and I loved Stewart's beautiful, almost poetic descriptive passages. The story was set in Crete, and it made me want to go there.

I've been a Mary Stewart fan ever since...but only, interestingly enough, of her romantic suspense novels. Stewart has written at least four historical/fantasy books set in Arthurian times, but I've just never had a desire to read them.

Like most of her early novels, Nine Coaches Waiting (published in 1958) feels slightly dated, but in a very charming way--as if one had somehow landed in the middle of a Grace Kelly movie.

I know what happens in the end (or at least I have a vague memory of it), so why am I re-reading this book? For the same reason that I grab a Mary Stewart book whenever I see one at my local branch library. I like visiting that era and those locations (Greece, France, Austria, Lebanon, wherever); I love Stewart's ability to put me there; I like her heroines and their love interests, and I still admire her lyrical, descriptive way of turning a phrase.

Plus, if you read any of Stewart's suspense novels, you'll know that she can sneak in a shocking twist with the best of 'em.

Any other Mary Stewart fans out there?

It's perfectly fine to make fun of Christians...

...but at least NBC is backing off on one instance of doing so.

This from an American Family Association e-mail:

"Tupelo, MS – The American Family Association (AFA) says the reason NBC has not publicly announced they are removing a segment from 'Will and Grace' that mocks the crucifixion of Jesus is that the network is under pressure from the show’s producers to keep the segment.

"Donald E. Wildmon, AFA chairman, says that is the only reason NBC has not already announced the withdrawal of the segment. AFA was successful in getting NBC’s 'The Book of Daniel' cancelled because of lost revenue and low ratings.

"He said he is basing his views on feedback that AFA supporters are getting from NBC affiliates.

"The network announced earlier this week that the April 13 episode of 'Will and Grace' would feature Britney Spears as a conservative Christian who contributes a cooking segment called 'cruci-fixins.' NBC said they would air the episode on Maundy Thursday, the evening before Good Friday when Christians mourn the crucifixion of Christ.

"'NBC has been bombarded with calls from their affiliates concerning the program. They have refused to publicly say they are dropping the segment. If they don’t drop the segment the network stands to lose millions of dollars in advertising revenue and have the episode dropped by about 40 percent of their affiliates,' Wildmon said.

"'But if they do drop the segment, it puts them at odds with the producers and Hollywood for bowing to pressure from what they say is a tiny number of rightwing fundamentalists. Do they offend Christians or do they offend Hollywood?' Wildmon asked."

Does anyone else see the irony?

Media across the world are being terrorized because of the Danish cartoons depicting Muhammad. Meantime, Jesus is everywhere mocked, parodied and made a laughing-stock, and that's perfectly OK.

We shouldn't be surprised. The Bible itself foretold that Jesus would be a stumbling-block--the Greek word is "scandalon"--that would be offensive to the world.

"He will be the truth that will offend them one and all
A stone that makes men stumble
And a rock that makes them fall
Many will be broken so that He can make them whole
And many will be crushed and lose their own soul
Along the path of life there lies a stubborn Scandalon
And all who come this way must be offended
To some He is a barrier, To others He's the way
For all should know the scandal of believing..."

I'm not surprised by the hatred of Jesus. But for me, it's like pouring salt into a wound to see the Saviour of my soul, the best Friend I will ever have, mocked and blasphemed.

But I'm not going to go burn something down in retaliation.

And on a lighter note, I answer the Monday Madness questions. Answer them here, or on your own blog!

1. I consider myself to be very organized.--Uh, NO. FALSE. I make attempts at it, making lists and going through periodic bursts of organization, but it's not my strong suit.

2. I tend to get more done when I'm pressed for time.--Sometimes. If I'm under pressure, I will generally rise to the occasion.

3. Multi-tasking is something I do often.--TRUE. I'll clean house while I'm talking on the phone, for example.

4. I might be a perfectionist.--Again, sometimes. I want some things to be perfect, but others I have a more laissez-faire attitude about. I try not to sweat the small stuff, and that's definitely not a perfectionist attitude!

5. I enjoy Mondays as much as I enjoy Fridays.--Definitely FALSE!!! I tend to endure Mondays--the week stretches out ahead of me like a gaping cavern. On Fridays, I almost always feel a sense of euphoria.

6. If I didn't make a list (or hang a post-it note) I'd forget what it is I need to do.--Well--not always, but since it could easily happen, I try to always write down important things.