And so this is Groundhog Day... 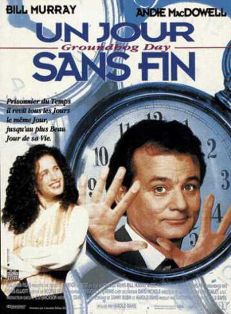 Naturally, I can't let Groundhog Day go by without mentioning the movie of the same name, which happens to be my favorite Bill Murray movie. I've watched this numerous times, and never fail to guffaw.

I just thought this French ad for the movie was great. Maybe they don't have Groundhog Day in France--well, of course they probably wouldn't--so the title there, "Un Jour Sans Fin," means "A Day Without End."

So...about Groundhog Day. Normally, even though it doesn't matter at all what Punxsatawney Phil or the nearer-me Jimmy the Groundhog (Sun Prairie, Wisconsin) have to say, Groundhog Day makes me happy. Because it means that January is behind us, Valentine's Day and two of my children's birthdays are right around the corner, and spring can't be too far away, can it?

A positive prognostication from Phil or Jimmy (or both), unscientific and silly though it may have been, was at least a glimmer of hope to those of us who shiver and trudge and scrape through long, frigid winters.

But even though Jimmy had good news today (Phil didn't), I find myself being kind of blase about the whole thing. Illinois has had one of the warmest Januarys EVER. It hasn't really felt like winter at all. It's enough to make you hop on the global warming bandwagon, for Pete's sake.

But if Groundhog Day, the movie, is on TV at all, I may try to catch it. After all, it's in keeping with a time-honored (well, since 1993 anyway) tradition.

Happy Groundhog Day, everyone!
Posted by Cindy Swanson at 10:21 AM