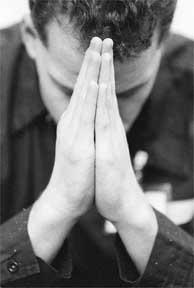 Today is the start of Major Danny Davis' 90 day prayer campaign to win the war on terror.

Says Davis on his website: "There is no doubt God is able to work an extraordinary miracle, and the Bible is full of precedent where believers humbled themselves, admitted their inability to get out of a tough jam, prayed to God for His deliverance, and a great work was accomplished on their behalf. The best and brightest minds all over the world are working feverishly trying to contain, quell, or defeat terrorism and have thus far been completely unable to even slow it down. In my opinion, God alone is able to do it."

According to his website, Davis is now stationed in Doha, Qatar.

Want to know more about embryonic stem cell research, from a Christian perspective?

Harvard scientists announced earlier this week that they've found a way to fuse adult skin cells with embryonic stem cells--raising hopes that treatments and cures could someday be developed without destroying human embryos.

Stevens tells AP: "There are other ways to get the cures that we want without destroying human beings."
Posted by Cindy Swanson at 7:23 AM