Visible Monday: Winning the Battle with My Weak Nails


I love pretty fingernails.  But for years I didn't have them.

As a kid and as a teenager, I bit my nails incessantly.  Well, finally one day I decided I was going to stop biting my nails.  It wasn't as hard as I had expected. Once I made the decision not to bite them, they grew.

And I would be delighted...finally able to apply pretty polish to my nails!  But guess what? The biting-the-nail habit turned into something arguably just as bad or worse: peeling off the polish.

Sometimes I would only have the polish on for a couple of hours and I would already be peeling and picking it off.  Yes, obviously I have issues.

I tried fake nails a few times, but my budget never really allows for them on a regular basis, and they left my real nails more unhealthy than ever.

The peeling-off habit was very damaging to my nails, too.  I read or heard somewhere that when you peel off the polish, you also strip off essential oils that your nails need to be strong and healthy.

I believe it.  My nails were flimsy.  I already take a B-vitamin supplement that is supposed to help hair and nails, so that should have been covered.

I don't know what prompted it, but one day last summer I decided I wasn't going to peel off my nail polish anymore.

It was a habit of long standing that I figured wasn't going to be easy.  But for the last couple of years, I've committed to trying to be the best woman-of-a-certain-age that I can be.  And having ragged, ugly fingernails just didn't jibe with that commitment.

"OK, FB friends, you are my witnesses: I hearby determine to break the appalling habit of peeling off my nail polish! If you see me doing it, you have my permission to slap me hard across the face!"


Since I made that decision, I haven't peeled my nail polish once--even though the temptation was strong at times.  And my nails have benefited immensely!

One of the first things I did was go and get a professional manicure to send me off on a good path.  Since then, I've had frequent polish changes at the nail salon (they're very cheap), and I'm learning to give myself a good home manicure.

They're no longer flimsy.  I've only had one beginning of a crack, and I fixed it with a remedy someone gave me on Facebook (maybe I'll talk about that in a future post...it's pretty genius.)

It's been over two months since I made my decision.  Who knows if I've permanently conquered the habit?  But so far, so good...and I'm so enjoying having pretty nails, I never want to go back!


Note: When I went public with my shameful peeling habit, I found out that lots of women do the same thing!  It's compulsive.  Have you ever had the problem?  I'd love to know...share in my comments!


Also, a reminder: Just 5 days left in my Soft Surroundings give-away of this beautiful top...go here to enter for your chance to win! 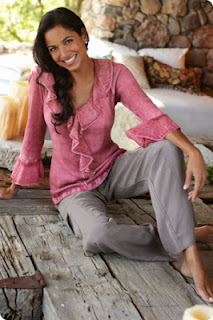 I'm participating in Visible Monday, hosted by Not Dead Yet Style!  Click the icon for more info....

Posted by Cindy Swanson at 8:03 AM

Your nails and all the colors look gorgeous here...so just look at the pictures and remember YOU CAN DO IT! Just take it one day at a time.

Love your nails!! I'm taking this as inspiration to stop biting and let them grow out. i used to wear acrylica and wow do they do a number on your nails!

Yes, I have been a polish-peeler too and my nails have paid the price! Yours look gorgeous now, Cindy - well done, and keep it up! Thanks for sharing your tips with Visible Monday.

Have a great week!

I peel like crazy, but the gel manicure helps stop it. I used to bite my nails like crazy... I actually used plastic glue-on nails to break the habit!

It's kinda funny... I used to be in radio through most of the 90's. I was on-air, but also a specialty program, sports, and studio producer. I miss it sooo much!

What do you do in radio? Morning drive, late night, talk program?

That's awesome you stuck with overcoming both of those habits. I paint my toes , bit never really paint my nails because I am always doing a project that will mess them up and it's one more thing I have to upkeep- that's why I have short hair- easy. Yours look great .

I love this! I recently started (trying) to stop biting my nails so they could grow naturally. Looking down at them today and of course the nail polish is peeling. Thanks for the tips! New follower!

Yep, I am guilty of nail polish peeling. It is hard for me not to do it. Once there is a chip, it starts to go downhill to polish peeling.
I just got some really pretty new polish and I am so excited to get back to polishing again.